Hello, all–this piece was difficult to write. It was painful but important. The issue it is about is even more so. This piece is a response to volunteering and offering solidarity to families who have loved ones in the Northwest Detention Center, one of the largest immigration detention centers in the country and only ten minutes from my front door here in Tacoma. Please read this piece, and consider joining in the fight for immigration reform. This issue is not for tomorrow, or a decade from now. This issue is for right now, today.  This isn’t a matter of politics–It is a matter of basic human rights. Please read and share.

Visiting Hours at the Detention Center 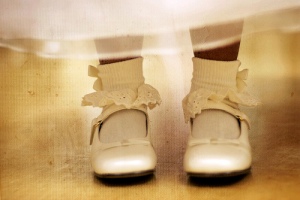 I can’t get her shoes out of my head.

They were tiny, white, and incredibly feminine. She wore small lacy socks with them and above these her   little brown legs grew like sprouts.

Someone had carefully fixed her hair, which shone with gel,   ornamented with pink baubles to match her ruffled pink dress.

Her small hand rested in a much larger one, which was connected to a stony faced man resolutely trying to disguise despair.  He pulled his little daughter along at a fast clip that for her shorter legs was nearly a run. This would have been comic if it was not so heartbreaking.

He spoke to her in Spanish so quiet I couldn’t make it out, gentle instructions and reprimands. She responded with a voice that sounded like Tweety-bird, high ad thin. Her big brown eyes were lakes, and only in them did I see her fear, her confusion. Only there did I see that no one had explained. How on earth could they?

All of the careful preparation– that was what killed me. It almost would have been easier to bear if these people had walked by me wailing, their clothes torn. Then the horror would be in the open. We could see it, and face it, and force it to obey.

But this way? This way was harder.

It was their sheer act of attempting to carry on that split me in two.  This man was here to visit a relative who had been jailed for nothing at all, whose only crime was trying to live in a nation someone, somewhere told him was a place of opportunity.  And instead of raging and roaring and beating his chest, that morning this man woke up, took a shower and brushed his hair and put on a clean collared shirt. And then he dressed his daughter, and told her they had to go see somebody. And then he took her to a strange neighborhood of factories and abandoned train tracks, and she worried about getting dust on those lovely shoes. And then he parked, and took her out of the car in front of a high grey building with small windows and a big fence. And he composed himself, willed his daughter to do the same. And they walked by me with their bravest faces, ready  to tell someone they loved that they missed them, that they were there for them, that they would wait.  They didn’t cry because tears don’t help anybody, tears don’t get citizenship papers.

Their strength astonished me.